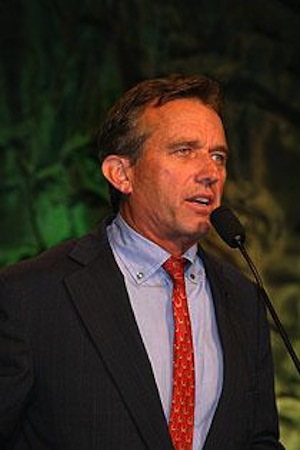 The following is a transcript of a speech by Robert F. Kennedy, Jr. at the Sierra Club’s National Convention and Expo on September 10, 2005 in San Francisco. Kennedy received the Sierra Club’s William O. Douglas Award on behalf of the Waterkeeper Alliance.

I want to tell you how proud I am to accept the William O. Douglas Award. Two of my most poignant memories as a child involved Justice Douglas.

One of them was when I was 11 years old. I did a 20-mile hike with my little brother David and with Justice Douglas and my father, which was a bird-watching hike on the C & O Canal, which he played a critical role in protecting. We started at four o’clock in the morning and walked all day. Then I did a ten-day pack trip with him. He took my whole family up to Olympic Range and the San Juan Peninsula and went camping for almost two weeks when I was eight years old.

Justice Douglas had a very strong relationship with my family. My grandfather brought Justice Douglas into public life and gave him his first job at the SEC as his deputy and then got Franklin Roosevelt to appoint him to run the SEC and played a critical role in getting him appointed as a justice of the Supreme Court. He said that his relationship to my grandfather was a father-son relationship. When my father was 18 years old, Justice Douglas took him for a walking tour of Azerbaijan and Kazakhstan, and all the Asian Soviet Republics. They were the first Westerners to enter Soviet Asia after the 1917 revolution. They had an extraordinary trip, and Justice Douglas wrote a book about it.

He was our greatest environmental jurist. He had a very, very close relationship with my family. As an attorney, I think the case that was the most important was Sierra Club vs. Morton, where he actually said that he believed the trees should have standing to sue [applause]. There is nobody in American history that I more admire than him. What he understood, which is what I think more and more people are understanding, is that protecting the environment is not about protecting the fishes and the birds for their own sake. It’s about recognizing that nature is the infrastructure of our communities, and we must meet our obligation as a generation, as a civilization, as a nation, to create communities for our children that provide them with opportunities for dignity and enrichment and good health.