At the center of this project is the belief that film is a potent learning tool. Though no film tells the entire story of an individual’s life, it can be a catalyst because of its reach and power. Film is unmatched in its ability to “shine a light” on a subject, and this is its greatest asset; motivating people to seek out knowledge and understanding of complex subjects in all their infinite nuances.

John has lived in the Pacific Northwest since 1972.  He resided in Southwest Washington, near Mt Rainier where he worked in the woods, hiked and camped in many of the same places that William O. Douglas wrote about so eloquently.  This formative time fostered a lifetime interest in all places wild.

He worked in broadcast television programming and production in Portland, Oregon for more than twenty-five years before leaving the industry.  As producer of a weekly news & public affairs program he received numerous letters of commendation and appreciation from a cross-section of political, community and cultural leaders.

John has developed media partnerships and produced programming for scores of events and campaigns including the award winning Lewis & Clark bicentennial.

A veteran of the New York City studio wars, Rick has mixed everything from Slideshows/ Audio books/ Video games/ Promos/ Radio and TV commercials/ Documentary Films and Indies/ to TV shows for all the major networks as well as HBO.  He has won many awards for sound design. 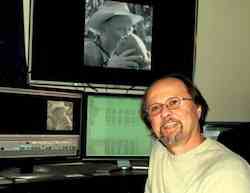 As a videographer and editor for over twenty five years, Dale’s understanding of the material makes for powerful presentations.  His vision and connection with the subject combine to propel the project.  As a native Oregonian Dale has explored the natural wonders of the Pacific Northwest.  It follows that he has found himself shaping stories of its people and places.

Currently as co-owner of Shrader Digital, his role as Senior Producer enables him to be an integral part of the storytelling process. His involvement with local and national non-profit organizations serves as the basis for his desire to relate their stories to the broader public.

“Those in power need checks and restraints lest they come to identify the common good for their own tastes and desires, and their continuation in office as essential to the preservation of the nation.” William O. Douglas, who died on this day in 1980

...degrading a law with text such as: "To declare national policy which will encourage productive and enjoyable harmony between man and his environment; to promote efforts which will prevent or eliminate damage to the environment and stimulate the health and welfare of man."

The Trump administration is proposing major changes to longstanding environmental law that would speed up the development of new oil and gas pipelines and place limits on the ability to review the environmental impacts of new projects. https://trib.al/lqiexTN

Santa gets letters, and so does the library. One reader writes, "Dear Library: What 20c SCOTUS justice would be the best Twitter follow?" We think William Douglas--if only to watch him pester @dick_nixon. But we'll defer to Prof. Davies. @horacefuller.

Cryptic dialogue in this 1970 issue of X-MEN, so I googled “Justice Douglas cliff” and learned that William O. Douglas led a hike to preserve the Washington coast. 2

Natural wonders should have their own legal rights | Commentary https://trib.al/i5NMQRx